Our blog is taking a break. If you’d like to contribute, please contact us. We hope to come back soon.

We at Yaso Therapeutics are developing a vaginal gel, called Yaso-GEL, that uses a single proprietary drug to prevent pregnancy as well as genital herpes, gonorrhea, and chlamydia. The gel is mucoadhesive, non-irritating, relatively low-cost, and stable. Yaso-GEL aims to be an MPT that can fill the need for non-hormonal contraceptives and protect women from sexually transmitted infections (STIs).

Trends of STIs in the USA are going in the wrong direction. In 2017, nearly 2.3 million cases of gonorrhea, chlamydia, and syphilis were reported to the CDC versus 1.7 million just four years earlier. “We are sliding backward,” said Jonathan Mermin, M.D., M.P.H, director of CDC’s National Center for HIV/AIDS, Viral Hepatitis, STI and TB Prevention. “It is evident the systems that identify, treat, and ultimately prevent STDs are strained to near-breaking point.”

Meanwhile, between 2010 and2014, 48% of pregnancies were unintended. This represents a decline of 30% in developed regions and 16% in less-developed regions.  Regardless, it’s clear that US men and women do not fully understand their risk of disease and conception. US women do want and need birth control, but 43 million are currently still at risk of unintended pregnancy.  Some at-risk women choose not to use birth control for religious or cultural reasons, and others don’t understand their reproductive biology and underestimate the risk. Digging deeper into this context, we conducted several online surveys to refine our target market in late 2017.  When asked who influenced their choice of birth control, including their religion, mate, or family a resounding thus revealing that women would use birth control if it better suited their individual needs. So, what is “right” for them, and why aren’t current choices adequate?

We find some answers in recent publications. A survey by Allergan identified women who used a modern hormonal method in the recent past. A stunning 60% of these women were currently using nothing yet did not desire to conceive and were still at risk for pregnancy.  When asked if they would use hormonal birth control in the future, the top reasons given by women who answered “not planning to use” or “not sure about using” were a) side effects, b) not sexually active, and c) concern about the amount of hormones. In addition, the persistent belief that hormonal methods cause abortion also discourages use by some women.  A non-hormonal, non-systemic contraception is an attractive option for the millions who currently won’t or can’t use modern methods.

In the United States, all modern methods require access to and utilization of medical services. Unfortunately, not all women have insurance or access to health care services. The costs of modern methods can be hundreds of dollars a year. The best IUDs cost over $1000, which many women cannot purchase in a single payment. Worse yet, today’s popular culture in the United States seems to promote the idea that we shouldn’t be planning to have sex or talking about it with a partner – that sex should be spontaneous and even irresistible. In this way, methods which require planning, thoughtful decision making, and accessing medical services are unhelpful. There is a clear need for more on-demand, non-prescription prevention options.

So why haven’t we made convenient, non-prescription methods more available for women in the same way condoms are available for men? The usual answer is that they are less effective, which puts a damper on the enthusiasm of the professional Family Planning community and drug companies. However, the convenience of over the counter (OTC) availability may override the desire for higher effectiveness. USAID reports that less than 10% of women from nearly all countries surveyed discontinued contraceptive use because they want a method with higher efficacy. Among married women, many choose not to use regular or longer-acting methods simply because they do not have sex that often. This may also apply to women without regular sexual partners.

Little has been done to develop new OTC contraceptives. As you can see in the photo-stitched image of the Wal-Mart family planning section taken in 2016, there has not been any real innovation in women’s contraceptives since the launch of the Today® Contraceptive Sponge in 1983. Yet in the “family planning” section shown in the photo, there are 16 linear feet of male condoms; 16 feet of early pregnancy tests, another 8 feet of personal lubricants, vitamins to enhance fertility and conception, and a small offering of vibrators. Less than 1 foot of shelf space was dedicated to female contraceptives and placed on the least promoted shelf. Today, that 1-foot of space has almost completely disappeared, reflecting a decreased demand coming on the heels of the unsuccessful nonoxyl-9 products matched by a decreased interest in providing innovative and acceptable on-demand products. 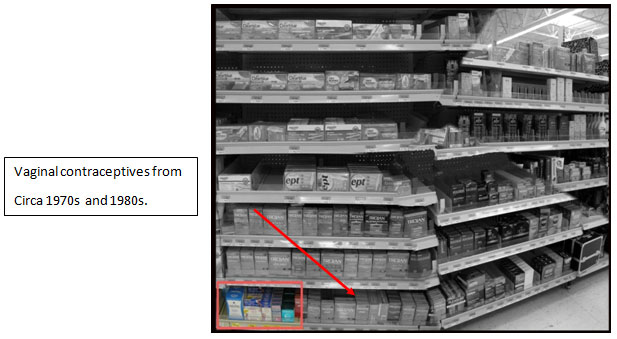 What women really need, of course, is a contraceptive that also protects them from STIs. 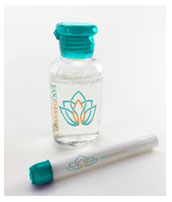 We at Yaso hope to help fill this gap in the MPT birth control offerings with Yaso-GEL.  The drug in our contraceptive MPT, called PPCM, renders sperm infertile by causing  premature acrosome loss. PPCM is also active against HSV, HIV, gonorrhea, and other pathogens as an attachment and fusion inhibitor. With a single active drug, we can conceivably prevent both unintended pregnancy and one or more of the most common STIs.  Supported by funding from NIH Small Business grants (R41AI069659, R43/44AI084225, R44HD092206), extensive pre-clinical studies show PPCM is not only active against pathogens but, as a non-sulfonated polymer, it is not cytotoxic, does not generate cytokines or an inflammatory response, and it does not damage epithelial tight junctions. PPCM could be used in conjunction with more potent, water-soluble HIV drugs.  PPCM can be formulated in a gel, a film, a suppository, and possibly even a vaginal ring, which may suit even more women.

In summary, we need more contraceptive choices – one of which should be a method that is available “on-demand” and only used when needed, is non-hormonal, non-systemic, have no side effects, prevents STIs, does not require any medical services, is convenient and accessible, and pleasant to use.

Mary Weitzel, CEO, President and Co-Founder has an engineering degree and MBA plus 30 years of senior management experience in specialty polymers, chemicals, women’s personal care and OTC drug products, four years as President of Instead Inc., and a total 18 years in women’s reproductive health.

Barbara North, Ph.D., M.D., is co-founder and Chief Medical Officer of Yaso.  She is a practicing physician and led the clinical development of both the Today® Sponge and the Instead Softcup®.

Any thoughts? Contact us to learn more about the submission process.

Spread the word about the promise of MPTs.

We will go further together – join the movement for MPTs.

Your financial and in-kind support can help make MPTs a reality.

The Initiative for Multipurpose Prevention Technologies (IMPT) is a project of CAMI Health, an organization dedicated to advancing the comprehensive sexual and reproductive health of women and girls worldwide. CAMI Health is housed at the Public Health Institute (PHI).

This project is made possible by the generous support of the American people through the United States Agency for International Development (USAID) under the terms of Cooperative Agreement #AID-OAA-A-16-00045. The contents are the responsibility of the IMPT, CAMI Health, PHI, and its partners and do not necessarily reflect the views of USAID or the U.S. Government.